Elf on the Shelf is an American Christmas tradition that dates back to a children’s picture book from 2005. It explains in rhyme how Santa knows who is bad and who is good. It describes that the elves visit the children from Thanksgiving to Christmas Eve and then return to the North Pole until the next holiday.

Read here how Elf on the Shelf works
and about the two most delightful rules of this Christmas tradition.

The 100 best movie quotes of all time in one list – compiled by the American Film Institute (AFI). A panel of more than 1,500 creative professionals selected quotes from American films that will circulate in popular culture, become part of the national lexicon, and evoke memories of cherished film, ensuring their historical legacy.

Tip: the list can be downloaded as a PDF and is perfect for a fun trivia quiz night

Week  47 – Meghan Markle appears on Ellen DeGeneres of all people

Surprisingly, Duchess Meghan was a guest on Ellen DeGeneres‘ talk show. DeGeneres, of all people. Her staff had recently been accused of racist remarks towards co-workers and Ellen faced accusations of bullying. Accusations that Meghan also faced. „Two bullies among themselves,“ it was said in social media.

On Thursday, however, Meghan speaks and jokes loose and relaxed about Archie, Lili and her new life in the U.S. with Harry.

Week  46 – Red Notice, the most expensive Netflix film ever, is out.

Red Notice, the most expensive Netflix film ever, is out.

Why it cost so much?

The winners of the European Nature Photographer of the Year competition have been announced.

The Spanish photographer Fitor was selected from 19,000 entries. His fascinating picture „Medusa ballet“ shows eleven Medusa jellyfish in the Spanish lagoon Mar Menor. Fitor worked on the realisation of the image idea for more than six years.

Week  44 – Halloween and the tradition of Jack-O‘-Laterns

Halloween, which comes from „All Hallows‘ Eve“, the evening before All Saints‘ Day, originated in Ireland and was brought to the USA by Irish immigrants in particular, where the custom is lived quite intensively.

On Halloween, a carved pumpkin is placed in front of the door to drive away the spirits of the dead. Children dress up as ghosts on Halloween and go from house to house. In doing so, they shout „trick or treat“ in reference to the spirits who will do evil to the homeowner if they do not make an „offering“.

Most beautiful Jack-o‘-Lanterns with patterns for next year

Controversial but hugely popular: the most successful Netflix series of all time launched in September and is called Squid Game. The series is brutal, macabre and disturbing.

Everything you need to know about the South Korean drama series

The BBC National Short Story Award, one of the most prestigious prizes for a single short story, has been announced for 2021.

An explosive life story with ups and downs. The life of Alfred Nobel, who created probably the most prestigious and coveted awards in the world.

Be fascinated by the story of Alfred Nobel

For years Britney Spears fought against the guardianship of her father. He controlled her private life and finances. Now the pop singer has won a victory in court.

„Will She Ever Be Free?“ Insights from Netflix’s Britney Spears documentary 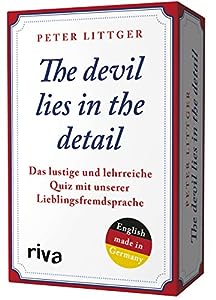 (92)
8,19 €
Das Kartenspiel zum Buch-Bestseller "The devil lies in the detail" von Peter Littger Mit den lustigsten Stolpersteinen unserer Lieblingsfremdsprache Englisch Dieses Kartenspiel ist für Spracheinsteiger wie Fortgeschrittene gleichermaßen geeignet
(von November 29, 2022 08:55 GMT +00:00 - Mehr InformationenProduct prices and availability are accurate as of the date/time indicated and are subject to change. Any price and availability information displayed on [relevant Amazon Site(s), as applicable] at the time of purchase will apply to the purchase of this product.)